China Painting Fellowship at The Schoolhouse 2016

I spent August at the Great Wall as I was invited to do a Schoolhouse Fellowship at Mutianyu Great Wall. My studio was in a nearby village, Beigou, and the residency culminated in an exhibition at the Brickyard retreat with a clear view of the Great Wall of China (the source of much of my inspiration) visible out of the windows of the exhibition hall. My paintings and the Wall were seen simultaneously!

I worked with various materials: ink on rice paper, acrylic on raw and primed canvas and watercolour paper, pens and marker pens on raw canvas, and collage, making around 54 paintings. I mixed many materials in new ways, extending my ideas of how materials could be layered and the kinds of mark making they could facilitate. This enabled me to also extend and renew my personal calligraphy. I felt that the time to reflect quietly on my ideas really extended them, and my surroundings and all the Chinese calligraphy I so admire entered my work in a fresh and unexpected way.

I have always been interested in brush strokes and their life force and ability to carry the traces of an idea and emotional response, and I wanted especially to explore the ways that brush strokes and mark making can be extended and evolved. My amazing surroundings gave me elements to use as an impetus for these interests.

After a few days some themes began to emerge. Firstly, it is impossible to live under the Great Wall and not be affected by its presence. It appeared to me as being like a garland along the peaks of the mountains. The mountains and several storms also entered the work, and the various Chinese carpets and mosaics around the Brickyard retreat, where I was invited to stay, also found their way into the paintings. I was fascinated by the Lotus leaves which always grow to face the sun, and I chose to paint them from behind. This allowed me to take the various shadows into my compositions. Another source of ideas were the fields of corn and also their night time characters.

After a few weeks the people working in the nearby fields also began to enter the work as I began to consider the continuity of time and how these people were the ancestors of the people who built the Great Wall. The idea of the footsteps of people who walked up to the Wall over the centuries became an important aspect of my large paintings, in particular 'Mosaic Mountain,' as I translated their footsteps into a mosaic of colours. It is this theme I will be exploring back in the UK though the other themes will probably enter the new paintings.
Back 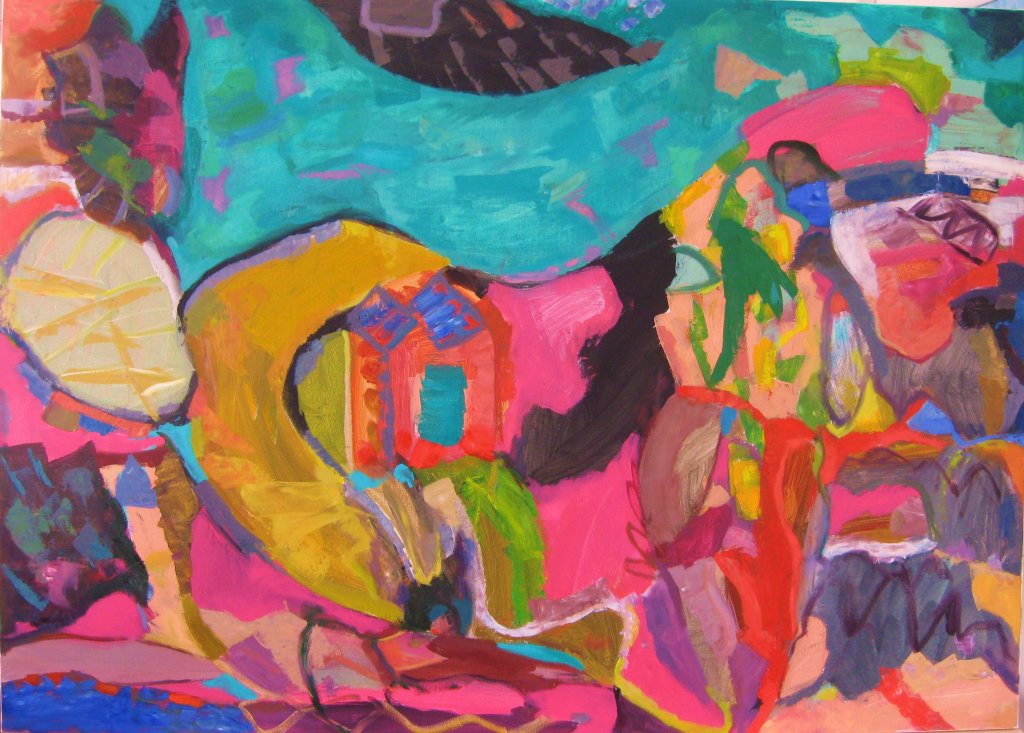