This section consists of paintings of cityscapes transformed by night and its magical colours and shapes. These evolved during my 14 years of living in Nicosia, and the many walks at night which resulted in certain shapes and colours becoming imprinted on my imagination. I also made watercolours from rooftops or cafes at night, and these fed into my abstracted interpretations. As I painted, certain elements came into focus, things I would not normally notice on a quick glance - such as the shadows of palms cast across walls, the shapes of illuminated windows set into a dark sea of un-nameable colours, patterns and neon lights, transparent curtains blowing in the breezes, figures behind curtains - an endless expanse of activity and overlapping lives.

When I first moved to Nicosia, I found the views of the city captivating, and different from anything I had seen before. As I spent a lot of time walking around the city at night, I gradually began to 'see' paintings all around me. Sometimes the surprising visual combinations prompted a change in the way I saw colour, and gave new ideas about composition. Night shades evoke a kind of visual music, and I like to explore the idea of colour emerging from darkness, and colour as an equivalent for light and dark. In with this theme are some street scenes, and other themes of night.
Back 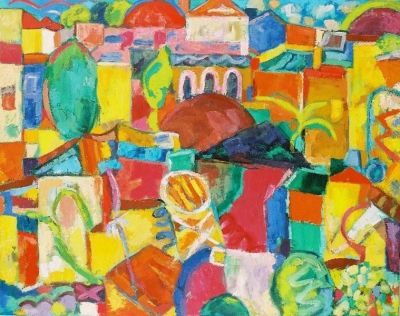